On the loss of “The Outstanding Jon”… and why this birthday is different. 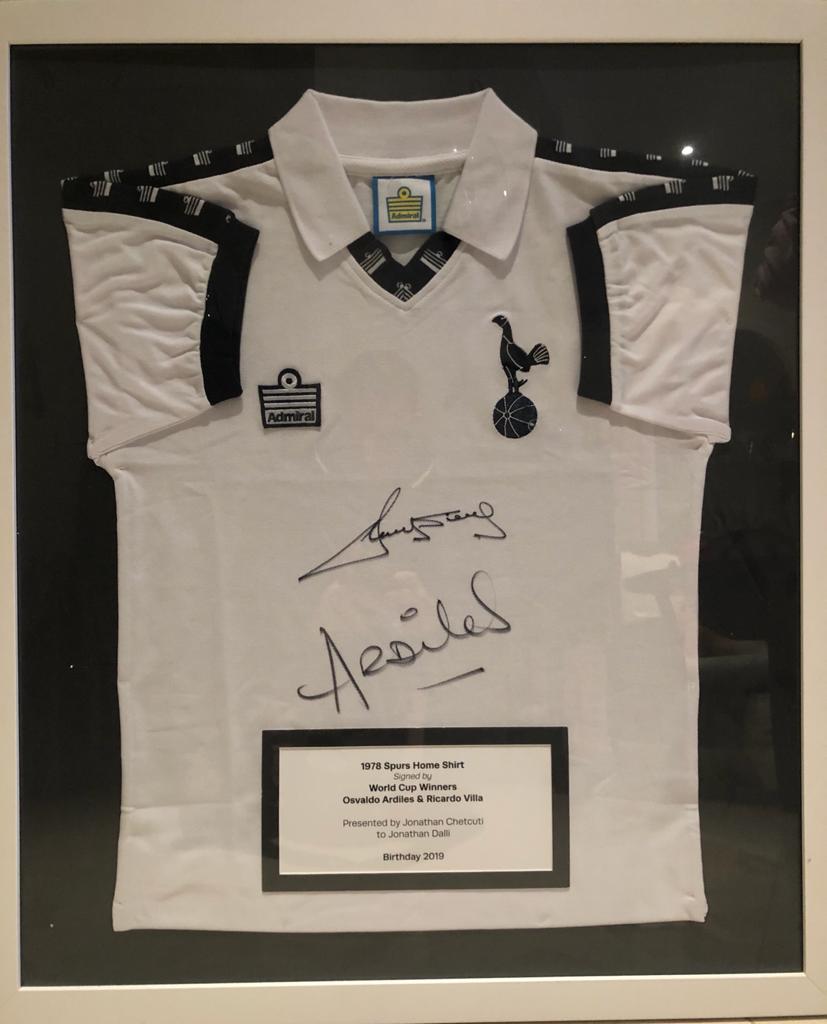 I remember last year I went to visit Jon just before a birthday lunch reservation with my wife, kids and parents. He came out of his hospital ward, waving a wrapped gift sporting a very proud smile. He insisted I open it in front of him, and so I did…. it was a replica home shirt signed by Osvaldo Ardiles and Ricky Villa. These two inseparable legends signed for Spurs just days after winning the World Cup with Argentina in 1978 (a very important year for Jon).  Back then, it sent shock waves around the world and paved the way for international superstars to arrive on British shores for generations to come.

Fast forward to 2020, and yesterday, on the eve of my 38th birthday, I collected an award on behalf of Jon. This birthday is different – I am of course celebrating it with my family, but I will miss that long phone-call where we would just laugh about everything that came to mind! At the end of May this year, circa 3 weeks after Jon’s sad passing I silently nominated him for The Outstanding Young Person Award by the Malta Branch of Junior Chamber International. I had won this award back in 2014 for business and entrepreneurial achievements, so it felt right reciprocating it. Yet another rubberstamp of our bond together.

A bond that started 12 years ago; with 10 years of business partnership. Here’s the rough chronology: on August 25, 2010, Jon and I, came together to set up what would become The Concept Stadium. Tough couple of years yet we toiled on, and incorporated a company in 2012, going full-time after I asked him to witness my wedding. A year after, we hired our first full-time team member. Fast forward 8 years; and Jon, myself, and our fantastic team of 16 creatives are working on a number of local and international accounts with so much pride! On our 10th anniversary, Jon was gone.

In sitting down to write this, I’m confronted with the question of how I would characterise my relationship with Jon. In the last few months, so much was written. Were we best friends? Absolutely. Brothers? Yes. But we were “partners,” which captures it best. The partner relationship begins as a bond of forced intimacy. For the good of the company, openness and honesty were always so important. We experienced some of our lowest lows and highest highs together. Yet the bond survived until Jon’s last breath … and it continues. And partners, as was the case for us, you emerge from all the challenges together as people you love as family.

In these 10 years, Jon and I lived what felt like a lifetime together. We communicated constantly. Initially, our conversations were focused on business planning —fantasizing about a future for a branding, web and marketing company that seemed like a pipe dream. Then all we talked about were the cold, hard practicalities of execution. Then surviving. Every day we faced the very real prospect of failure, along with everything that would have entailed — explanations owed to clients, to our team members, public embarrassment, the need for an abrupt career overhaul, so on and so forth. The stress was unstinting. But I always had Jon, who was always right there alongside me. When I teetered, he steadied us. When he had his doubts, I allayed them. Somehow, we always managed to level out. That’s why this birthday is different, because this year is different.

Ironically, death was a kind of spectre that always hung over our heads. We gave life to The Concept Stadium, and the anxiety that, some day, we would have to put it to rest was implied in every conversation we had about how to grow it. There was an inexorable logic to this: if the company wasn’t growing, it was already dying. The margin for error was that thin; the clock never stopped ticking. What a strange thing to confront now: The Concept Stadium survives, but he does not.

I am so proud to say that our partner relationship was never a competitive one, and just like the award, it was “outstanding”. The only reason he and I mostly avoided this pitfall was because we addressed our insecurities to each other directly, rather than let them simmer beneath the surface. I soon came to learn that one of the most valuable opportunities of an experience like this was that your partner’s strengths could become your own. This gave us a shared purpose. When we were together, a jolt of energy sparked, and we had what were perhaps our most focused, productive days together.  We used to sit down fleshing out aspirational ideas, always with a smile on our faces.

Smiling could be difficult in circumstances like these, although I know Jon would want me to smile every day. When we went back to the office this year, I used to sometimes sing upon entering the office – motivating our team was very important, in a pandemic-year and its effects on business – yet the first thing I do would be to touch his office door before stepping into mine. I would let people leave and sit in his room, imagining his voice talking about his love for sport, his plans for his son and our next trip together, whether its for business or with our families. In our creative pitches, we always felt confident, yet we never “practised” a running order – it just came naturally. Cultivating new relationships and networking was an arena where both of us shone, especially together. In these few short months since he died, the fact of his absence jabs at me constantly… writing these memories down is one immediate example. Jon would have been the first person I’d have asked to read through them.

And so, in this birthday, I know something that I wish I didn’t. When your partner is no longer here, what have you lost? It’s an even harsher reality than I would have guessed. He was the only one who could understand exactly what it was like day in and day out. The hardships, the wins, the losses. Now, these memories are mine alone. I sometimes think about the stories we might have reminisced about down the line, looking back over our work together. Most likely, we wouldn’t have talked about the obvious watershed moments like onboarding a new account or winning a creative pitch. Instead, it would have been the idiosyncratic stuff, the small details — the kind of memories that you’d likely overlook without mutual prodding. And we celebrated way beyond The Concept Stadium…. we also celebrated milestones together, such as welcoming our children. He was also unflinchingly devoted to what he cared most about in his life — his faith, his family, his marriage. He and I shared experiences of pure joy together. Yet none of it compares to the way his face lit up when on Friday afternoon he would spend time with his son. I choose to remember Jonathan as he was in these moments, when he was at his happiest. When he was at his very best.

On this day, we would be talking about Osvaldo Ardiles and Ricky Villa and what they managed to achieve in 1978… the year our Guardian Angel was born.