The Concept Stadium supports Hospice Malta with another €5,000 donation 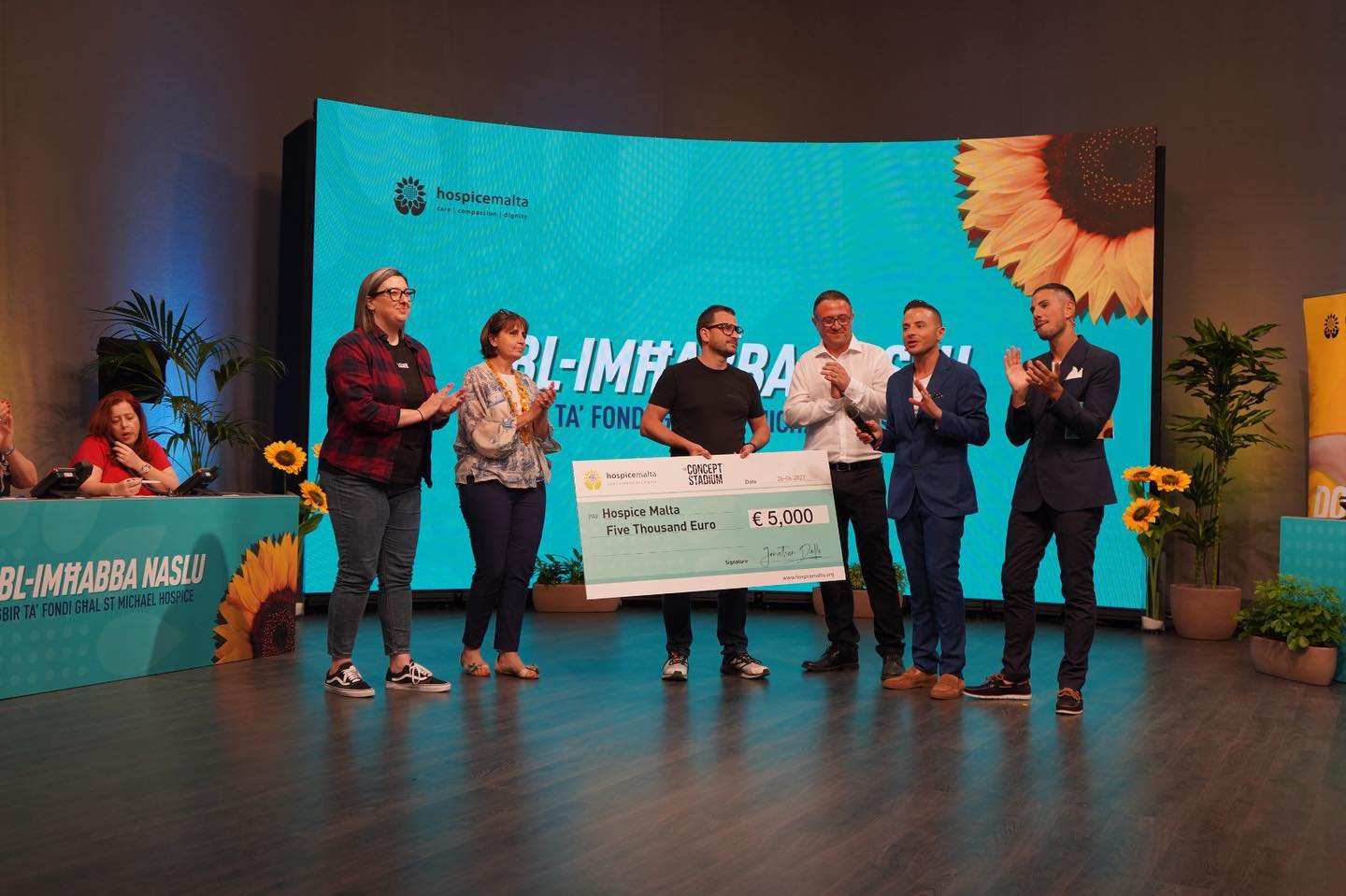 For the second consecutive year, local Creative Marketing Agency, The Concept Stadium, donated €5,000 to Hospice Malta. This donation was made on the 26th of June during the “Bl-Imħabba Naslu telethon”, as the agency also went into its third consecutive year of being Hospice Malta’s marketing partner.

This is the second year in a row that The Concept Stadium made such a donation towards Hospice Malta during its Bl-Imħabba Naslu telethons. It serves as a re-affirmation of The Concept Stadium’s management and team’s commitment and appreciation towards Hospice Malta’s mission in providing free palliative care to all those who may come to need it while offering support to their family members who are also going through a tough period.

“This is now the third year running where The Concept Stadium has been working hand in hand with Hospice Malta as its Branding, PR & Marketing partner. Apart from supporting the evolution of Hospice Malta’s brand, we wanted to also keep doing our part to help the organisation with its ambitious St Michael Hospice project,” said Jonathan Dalli, Founder & CEO of The Concept Stadium as he presented the donation together with members of the team who were also present at the telethon, supporting with brand, social media and corporate communications. Jonathan Dalli also announced that he will be walking the Camino De Santiago once again, next year, in aid of Hospice Malta.

“We hold Hospice Malta very close to heart. This is not only because of our mission to be a purpose-led company because also because we cannot forget the tremendous support Hospice offered our team after we lost our beloved Co-Founder and now Guardian Angel Jonathan Chetcuti in 2020 following his hard-fought battle with illness,” concluded Dalli.

Apart from this donation, The Concept Stadium’s team was on-site and working hard to promote the telethon, all with the aim of assisting Hospice Malta in running another successful telethon. Apart from supporting with the branding, social media management, PR and digital campaigns, the team also volunteered its time during the telethon day itself to put together a last effort of promotion to get the public to donate.

“It is an absolute pleasure for us to continue developing this ongoing relationship with The Concept Stadium as we believe that throughout the past three years, they have been a key element in raising awareness on Hospice Malta and its work. The support that The Concept Stadium’s team gave us in putting together and promoting this telethon was crucial to the success for both the event, as well as reaching the goal of opening the St Michael Hospice to the public, Malta’s first palliative care facility. We thank them wholeheartedly as they are an organisation that walk the Corporate Social Responsibility talk,” said Kenneth Delia, CEO of Hospice Malta.

“Believing that all we have is time, I set out to be more than just another CEO” - Jonathan Dalli, CEO at The Concept Stadium